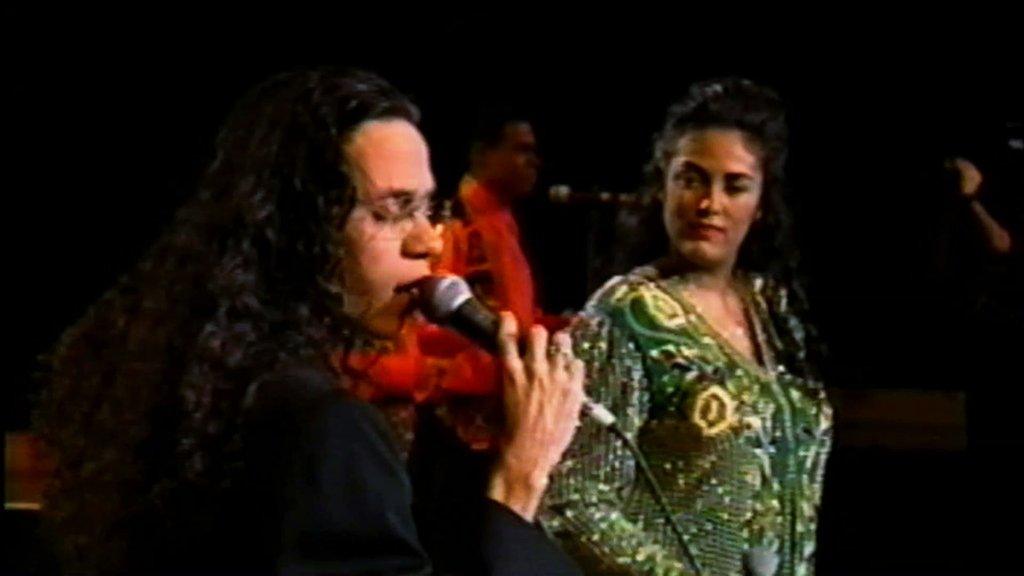 In the mid-1990s, two young Nuyoricans, Marc Anthony and Linda Caballero —known as La India— became synonymous with a genre called Salsa Romántica.  Together they spearheaded a Salsa revival in the United States and across Latin America.

Blessed with powerful, expressive voices, Marc and La India got their big break with producer Sergio George, whose aim was to remake Salsa, languishing since its heyday in the 1970s. Spurred by the success of Gloria Estefan, George had his eye on a new generation raised on rock and roll, R&B, and Hip Hop. “There was no longer a hard-core salsero out there in a big way,” he says, “not like before. So I [did] have to try to get people who aren’t Salsa fans by toning it down a little bit lyrically, musically where they can understand it.”

It was a time of musical diversity and fusions, and Marc and La India shared in the excitement.

Born in 1968, Marco Antonio Muñiz, known professionally as Marc Anthony, grew up in East Harlem and had sung backup vocals for the boy band Menudo.  He had also recorded an album, Rebel, in the electronic dance music style known as freestyle before switching to Salsa.  Sergio George produced his 1993 Salsa debut album, Otra Nota (On a Different Note) which included a cover of “Hasta Que Te Conocí” (Until I Met You), a hit song by Mexican singer Juan Gabriel. As the story goes, Marc had been reluctant to record in Spanish until he heard Juan Gabriel’s version of the song during a taxi ride.

Linda Caballero grew up in the South Bronx, where her grandmother nicknamed her La India, for her long black hair and dark features. She sang freestyle as a teenager, and experimented with house music, Jazz and R&B. Her record label wanted to promote her as the Latin version of Madonna, but she gave up a promising career as a pop singer and decided to switch to Salsa. “I felt like I really needed the other side,” she said. “I really needed to cross-over to my people.”

In 1992, she recorded a well-received album produced by famed Salsa and Latin Jazz pianist Eddie Palmieri, Llegó la India via Eddie Palmieri (La India has Arrived via Eddie Palmieri). But it was Sergio George who paired her with Marc Anthony for Vivir lo Nuestro (To Live Our Love) in 1993. “The vocal interpretation that they bought to the table, nobody had really had heard up to that point—those kinds of riffs, that kind of energy and power going to a track,” George said.

“It is really amazing how much a song could do for you,” India recalls. “Vivir Lo Nuestro just completely took us to a different level. And from there on we never had to look back.” The two young artists helped bring Latinos and non-Latinos back to dance floors across America as Salsa swept the country once again.

Sergio George then produced India’s 1994 album, Dicen que Soy (They Say I Am), with feminist themes in many of the tracks. It was “India doing her thing,” George said. She became a legend to Latinos, but has never crossed to the mainstream market. Some critics put it down to her “controversial” persona. Sony producer Tommy Mottola has praised India’s voice, calling it “one of the most fascinating voices I have ever heard,” but he felt that “[her] rhythms are more narrow than the pop rhythms of Latin music, and that they didn’t work in English.”

Still, her career as a musician flourished. In 1996, she worked with Tito Puente on Jazzin, an English-language album of swing classics with a Latin twist on RMM Records. She also released India: Mega Mix that same year. She sang a duet titled “La Voz de la Experiencia” (The Voice of Experience) with Celia Cruz, the Queen of Salsa. It was then that Cruz crowned La India The Princess of Salsa.

In 2003, she released Latin Songbird:Mi Alma y Corazón (My Heart and Soul). The album's lead single “Sedúceme” (Seduce Me) became a hit on the Latin charts and topped the U.S. Billboard Hot Latin Tracks for several weeks. This romantic Salsa hit single was India's first number-one song and brought her a new fan base with many awards and nominations, including two Latin Grammy nominations for Best Salsa Album and Best Tropical Song in 2003, and her third Grammy Award nomination for Best Salsa Album in 2004.

La India continues to perform to a devoted fan base in venues across the world including the prestigious Miami club Hoy Como Ayer.

In 1999, soon after the success of Ricky Martin’s first English-language album, Marc Anthony recorded an English album for Tommy Mottola that featured the hit song “I Need to Know.” An HBO Special from Madison Square Garden cemented his appeal in the mainstream, but he made his true mark singing Salsa in Spanish.

Todo a su Tiempo (All in Due Time), produced by Sergio George and released in 1995, won wide critical praise, a Grammy nomination and a Billboard award for Hot Tropical Artist of the Year. All eight singles released from the album hit the top of the Billboard Tropical Songs chart. Anthony's next Spanish language album, 1997’s Contra La Corriente (Against the Current), featured “Y Hubo Alguien” (And There Was Somebody) and became Anthony's first number-one single on the Billboard Hot Latin Tracks and the first by a Salsa musician. The album became the first Salsa album to enter the English language Billboard 200 chart.

Together, the three albums, Otra Nota, Todo a Su Tiempo, and Contra La Corriente, established Marc Anthony as one of the top-selling singer in the history of Salsa, able to sell out Madison Square Garden and prestigious venues internationally. The two-time Grammy Award and five-time Latin Grammy Award winner has sold over 12 million albums worldwide.