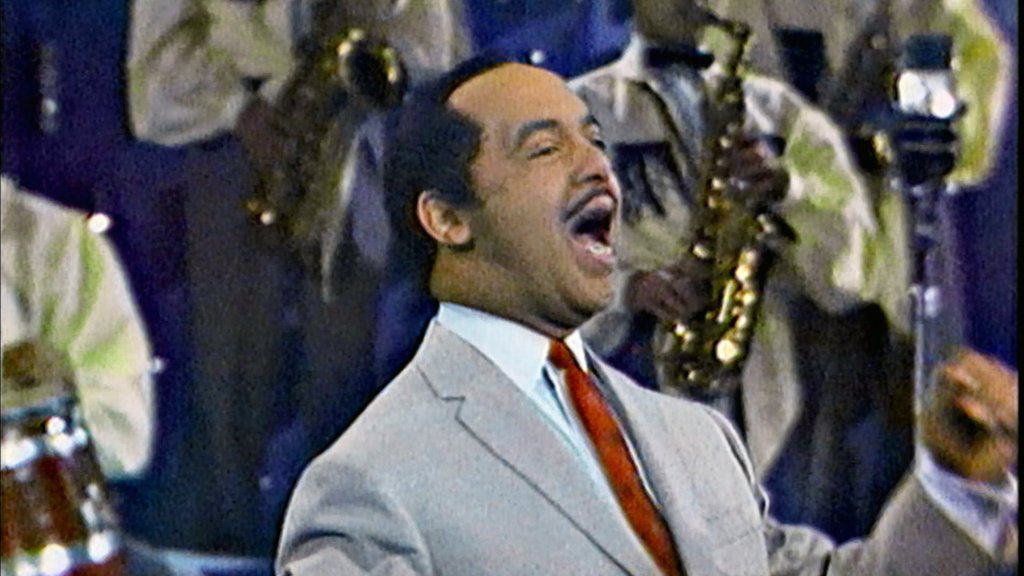 In the early 1950s, the Mambo burst onto the international stage with hit records by Dámaso Pérez Prado, a Cuban working in Mexico City.

Born in 1916, the son of a schoolteacher and a journalist, Pérez Prado studied classical piano in his early childhood, and was a pianist and arranger for the Sonora Matancera, Cuba's best-known musical group at the time.  In 1949 he moved to Mexico to form his own band.

In New York, “the big three” — Machito and his Afro-Cubans, Tito Rodríguez, and Tito Puente—ruled at the Palladium Ballroom, but Pérez's mambos, with their fiery brass riffs and strong saxophone counterpoints, punctuated by his trademark grunt, became more popular than the jazzier sound of the New York bands.  His percussion section, tight and dense, left little room for the solo improvisations of jazz, making it easier for dancers. With his trademark goatee and turtle neck sweaters, the flamboyant band leader rode the wave of the Mambo Craze in the 50s. “He leaped, kicked, shouted, grunted with a dynamic presence from the stage that took Mambo all the way into the pop mainstream,” wrote AllMusic critic Steve Huey.

Prado’s famous grunt, which sounded like “ugh!” is decoded in the liner notes of producer Watson Wylie as “Dilo!” —a Spanish word meaning “Say it!” or, in the context in which Prado uses it, “Give out!.”  “He’s urging the brass section to “Give out,” says Wylie, “as he coaxes the saxophones to “Say it!”

His compositions “Mambo No. 5” and “Mambo No. 8” became popular favorites, and, in 1955, he topped American charts at number one with a Cha-Cha-Chá version of “Cherry Pink and Apple Blossom White” which held the spot for 10 consecutive weeks, and sold over a million copies. The song also went to number one in the UK and in Germany. In 1958 one of Perez's own compositions, “Patricia” became his last record to capture No. 1 on music charts.

Perez Prado’s U.S. success came and went with the Mambo wave. In the early 1970s he settled back in Mexico with his wife and two children.  His popularity in Latin America still strong, he toured and continued to record, often appearing on Mexican television.

His last United States appearance was in Hollywood on September 12, 1987.

Pérez Prado died of a stroke in Mexico City on September 14, 1989, aged 72.  His legacy lives on as the bandleader who took the Mambo out of the New York City dancehalls to the pop and international mainstream.