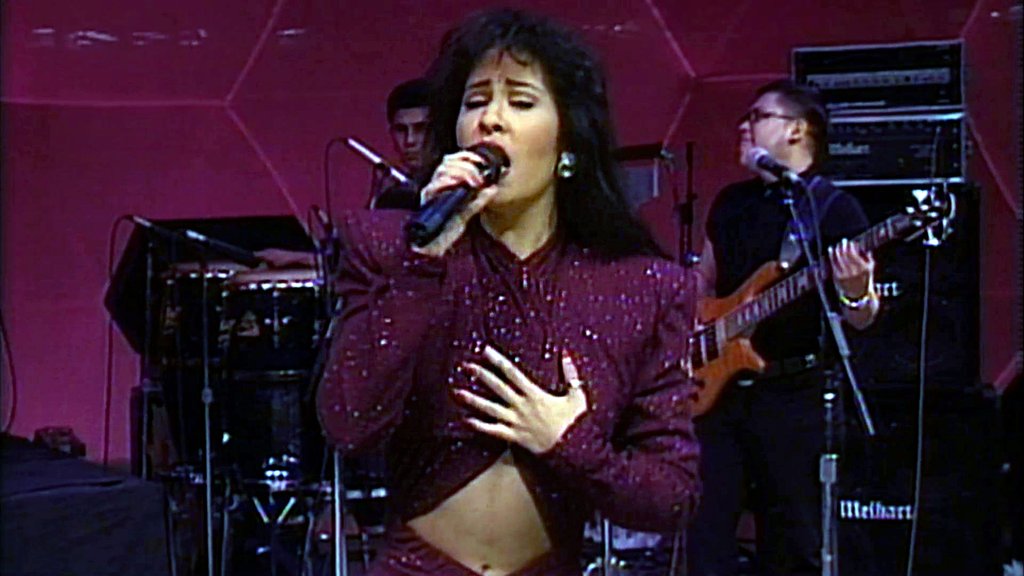 Selena Quintanilla-Pérez, known to all simply as Selena,  was one of the most celebrated Mexican-American entertainers of the late 20th century. She is credited with catapulting Tejano, or Texas-Mexican music, into the mainstream market.

Tejano is a hybrid, a blend of Conjunto, an accordion-based style dating back to the late nineteenth century, with a modern rhythm section of electric guitars, bass, keyboards and drums. By the mid-twentieth century Tejano had traveled from the cantinas to ballrooms, and then to clubs where it was played by smaller ensembles that included a button accordion, drums and guitar. New, young bands—some sequin-clad, some with cowboy boots and ten-gallon hats —joined the Quintanilla family band, Selena y Los Dinos, on endless tours on dilapidated buses to towns across the Southwest: Lake Jackson, Laredo, El Paso, surviving on candy bars and baloney sandwiches.

And then began the road to the top. Radio promoters played Selena y Los Dinos’ records in growing numbers:  KXTN in San Antonio, KLAX/ Los Angeles, and KKLB/Austin. The venues got larger, the crowds bigger. They cut records with independent Tex-Mex producers – Freddie, Cara, Mabel -- selling as many as 20,000 records. In 1986 and again in 1987, Selena won the Tejano Music Award for Female Vocalist of the Year. She won again in 1989, and for seven years thereafter.

With her beautifully textured voice, flashy outfits, her open smile, and her mix of Tejano and Latin pop, Selena had unlimited appeal. She was signed as a solo artist by EMI Latin in 1989, and soon became the focus of EMI producer José Behar, who saw in Selena the next Gloria Estefan for the Latino and mainstream and international markets.

Selena’s 1992 breakthrough album, Entre a Mi Mundo(Enter My World) reached number one on the U.S. Billboard Regional Mexican Albums chart and stayed there for 19 weeks.  One of its singles, “Como La Flor” (Like the Flower), became one of her most popular signature songs.   Selena's next album, “Amor Prohibido” (Forbidden Love), spawned four No.1 Latin singles, including the title track, as well as “Bidi Bidi Bom Bom” and “Fotos y Recuerdos” (Pictures and Memories). She became Tejano’s biggest star, carrying the entire genre in her wake. Yearly sales skyrocketed from the tens of thousands in the 1980s to a 40 million-dollar industry by 1995. She performed three times at the Houston Astrodome —in 1993, 1994 and 1995— each time drawing over 60,000 fans.

At age twenty-three Selena seemed to have it all: huge commercial success, a devoted fan base and even a clothing line, and over her father Abraham Quintanilla’s objections had married Chris Pérez, her new lead guitar. She was even working on an English album to take her career into the mainstream.

On March 31st, 1995 she was expected at Q-Productions, her family studio, for a recording session.  She never arrived. On her way to the studio, Selena was shot and killed by the troubled former president of her fan club.  The brightest star of Tejano had been suddenly extinguished.

The reaction of the Latino community resembled the aftermath of the deaths of Elvis Presley and John Lennon. Her funeral, attended by tens of thousands of mourners, was testimony to her standing as an icon to Mexican-Americans and Latinos of all generations. Another Latino icon, Jennifer López, was soon cast to play the leading role in a feature film about her life.

Selena’s impact in Mexican music and Latino culture far outreached record sales and industry awards. It was “tangible evidence that Mexican American culture in general, and Tejano music, with its roots in the dusty cantinas of Texas and the Southwest, was something of which to be proud,” wrote Texas music writer Ramiro Burr.

Selena’s posthumous English-language album, Dreaming of You, sold over 200,000 copies the day it was released. It would eventually top 6 million.